ll new material from SPFU. Clean sounding punk-swing backs up Cristina's impressive vocal abilities. Songs that range from an unflinching gaze into the world of police brutality and suicide to all-out celebrations of making it back from the edge. 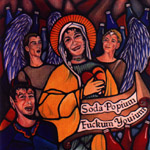 can't believe I haven't had this online before, shows what you learn when you do inventory. Only about 15 of these left, the first release by this late, great female-fronted ska / punk band from Santa Cruz.