Some Boys Got it, Most Men Don't

his is the fourth full-length release from Vancouver's d.b.s. There's still plenty of brilliantly executed melodic hardcore here, but they've expanded on this cd, with two acoustic tracks and one that can only be described as a metal bloodbath. 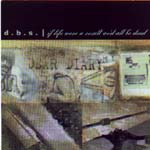 if life were a result we'd all be dead

his CD is the missing link between "I is for insignificant" and "some boys got it, most men don't." It was recorded earlier than the latter, but has only just come out. Nine songs of the flawless melodic style that d.b.s. has made their trademark.

i is for insignificant

efore 'if life..' and 'some boys..' came this CD, released on DOA's label, Sudden Death. (boy are those people obsessed with hockey!) d.b.s. are younger here, but they rock, as always.

Forget everything you know

his is the last ever release by d.b.s. It's as good as anything they've ever released, and that's saying a lot. I'm sad to see them go.